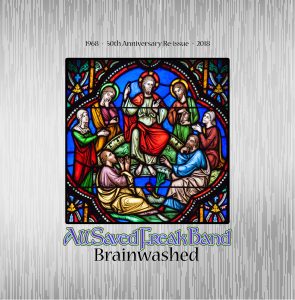 The All Saved Freak Band  is widely recognized as one of America’s earliest pioneers in what has since become known as Contemporary Christian Music. Five years before the term, “Contemporary Christian Music,” was coined, and one year before Larry Norman, the “father” of CCM released his first album, the music of ASFB founders, Joe Markko and Larry Hill, was already being played on local radio in Ohio. Described by Black Keys and Arcs frontman Dan Auerbach as “the forerunners of an entire genre,” the enduring music of the All Saved Freak Band continues to provide value for a new generation of listeners.

Brainwashed– 1976. “This is a tough band to figure out. With some of the best Christian 70s rock by anyone anywhere their music is stunningly powerful with a dark, creeping psychrock menace achieved via songwriting and guitar/organ arrangements that spell big league all the way. If “For Christians, Elves & Lovers” is the mellower side of ASFB, “Brainwashed” is the flip side of the coin. This album is non-stop sizzling stuff with plenty of heavy organ, harmonica and, of course, Glenn Schwartz’s searing guitar fireworks. This is an incredible album folks. So much variety here, too – it never gets boring.” [Ken Scott, Archivist – Vintage Vinyl Jesus Music]