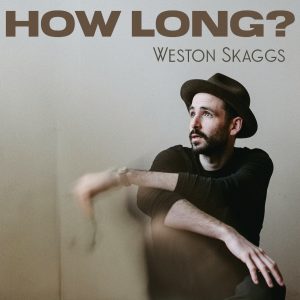 Buzzing into being like a second-hand mower, “How Long” is an abrupt alarm that shocks then awakens the soul’s defense systems.  Psalm-like in its complexity, the new single by Weston Skaggs, is a protest anthem, dirge, and Whitmanian reflection all rolled into one pill.  Just as beloved America’s bard once quipped, “Every atom belonging to me, belongs to you,” Skaggs’ elongated notes in the chorus are cut from the universal chord charts of being human.

The movement of the song fluctuates from a wintry mix of doubt into the beginning of Spring. Early indignant verses evoke the names of biblical stalwarts as a kind of inductive evidence list–a Who’s Who list–meant to show God the error of his ways.  After the first minute of the song, Skaggs’ voice turns hard and petrified, assured of the perspective and justification of the grief imbued all through the song.  But this is not a simple plot of show and tell: showing God how many of His beloved have suffered and telling everyone about it to spark outrage.  Instead, the audience begins to hear a tonal shift in the chorus dynamics and intuits the symbolic peaks and valleys of Christian life altogether in the cries of “How long?”  Tapping into the prophetic tradition of Isaiah and others, Skaggs pulls forth a deep communal cry for God–not against him– to change His mind on our behalf.  How long will we need to languish in the aftermath of a pandemic?  How long will our ruptured relationships remain untended and withering on the vine?  How long will we see injustices around us through abuses of power?

“Father, teach me to wait even in heartbreak,” is almost whispered nearly two minutes into the track whereby the artist seems to be preparing to ascend a hill again, touting his prayer, in an aggressive ascendance to the temple of God.  But rather than discovering more escalations in blood pressure and digressions of fault and blame, the litany of “How long” gradually becomes softer and distilled.  The question shifts.  The cross examination begins.  God asks, “How Long?” The venom and self-righteousness of the human questioner evaporates until, child-like, the voice simply begs to know when things will return to hope.

In fact, “How Long” is a duplex with one apartment set in despair and the other established in hope.  By the end, the hypnotic call of “How long” is not aimed at God, but is uttered by the believer at the believer him or herself.  The list of names, props of the empty judicial hearings brought by a faulty prosecutor, are gone too.  Instead, the question of “How long” is snapped off the icy, communal wall of outrage, and becomes a single clear mirror in which each listener is asked to see our reflection and feel the ache of others while wondering if we, in our propensity to cry out, might not be the hands and feet of God ourselves.

Rich Mullins’ Legacy Lives On Through His Music